By Ozlem Warren on December 3, 2013 in Pilafs and Rice, Regional Signature Dishes; Mains, Sides and Desserts 14

Firik or Freekeh is a super food and an ancient grain; I absolutely love its delicious, nutty taste, similar to pearl barley. Freekeh used to feature a lot at my grandmother’s table in Antakya, ancient Antioch, when I was a child. Cooked with bulgur and fresh butter, it always tasted so heavenly and the mesmerizing smells always greeted us. Freekeh is a real treat by itself and pairs with bulgur, vegetables, chickpeas and meat beautifully. Ancient firik or freekeh; a delicious and healthy grain, pairs with bulgur and vegetables so well.

Firik, (as in Turkish) or Freekeh (sometimes spelled frikeh)  or farik is a cereal  food made from green drum wheat that goes through a roasting process in its production.  Firik is a popular and ancient grain used Middle Eastern & Southern Turkish cuisine and also popular in Levantine, Egyptian, Arabian Peninsula and North African cuisine. The wheat is harvested while the grains are yellow and the seeds are still soft; it is then piled and sun-dried. The piles are then carefully set on fire so only the straw and chaff burn and not the seeds. It is the high moisture content of the seeds that prevents them from burning. The now roasted wheat undergoes further thrashing and sun-drying to make the flavor, texture, and color uniform. It is this thrashing or rubbing process of the grains that gives this food its name, farīk or “rubbed.” The seeds are now cracked into smaller pieces so they look like a green bulgur. This delicious, ancient grain freekeh is a similar food made from barley and it is also mentioned in the Bible. Freekeh is also considered as a superfood, as in the category of the healthy grains such as quinoa and farro. Freekeh has at least four times as much fiber  as some other comparable grains, consisting mostly of insoluble fiber. It also has a low glycemic index so is suitable for managing diabetes. You can get freekeh in Middle Eastern or specialty food stores abroad, though it is widely available in Turkey. Bulgur is now widely available in supermarkets, so great to see. 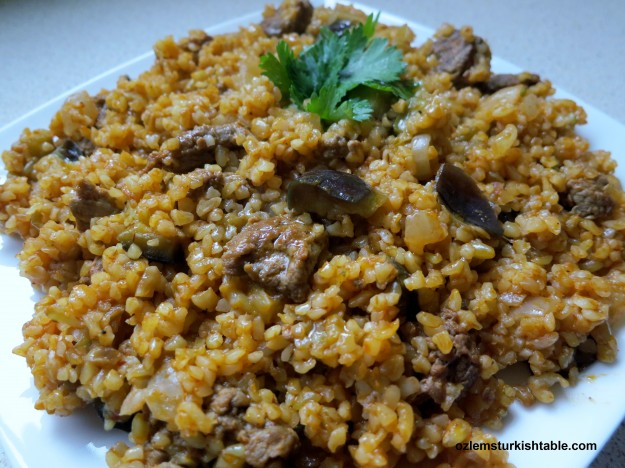 I cooked my firik, freekeh here with bulgur, onions, eggplants (aubergine) and chunks of meat. The delicious nutty texture of the grains worked so well with the vegetables. Addition of any meat of your choice is lovely though just with the grains and vegetables itself, this meal would be a delicious vegetarian feast. Chickpeas would go well in this dish too. Turkish hot pepper paste, biber salcasi, gives a wonderful, rich flavor to this dish; you can make your own red pepper paste too, here is my recipe  if you like to make your own. You can also add some heat and flavor with the Turkish red pepper flakes, pul biber. 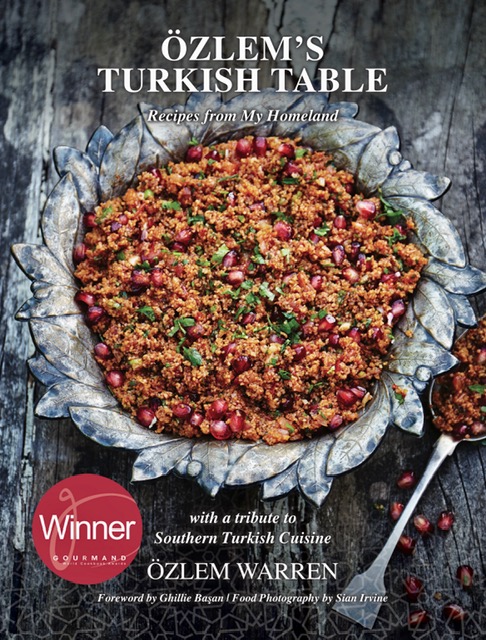 This recipe and many more authentic, wholesome, delicious Turkish recipes are included at my cookery book, Ozlem’s Turkish Table – Signed copies (now 10 % off) as well as ebook options are available at this link, hardback signed copies are delivered worldwide. Layer the eggplant pieces on a tray and sprinkle salt over them (salt will help the moisture and bitter juices come out of the eggplant).

First prepare the eggplants (aubergines). Peel the eggplants lengthways in stripes using a vegetable peeler or a small sharp knife. Cut the eggplant in quarters and then slice into bite size pieces. Layer the eggplant pieces on a tray and sprinkle salt over them, leave them aside for 15 minutes (salt will help the moisture and bitter juices come out of the eggplant). After 15 minutes, dry the eggplants with kitchen or paper towel thoroughly.

Heat the 2 tbsp. olive oil in a heavy pan and sauté the onions until soft and they begin to color. Add the pieces of meat, stir and cook for another 1-2 minutes. Toss in the diced eggplants and the remaining 2 tbsp. olive oil. Stir and sauté over medium heat for 3-4 minutes, until they start to color and soften. Then stir in the red pepper paste and tomato paste and combine well with the vegetables and the meat. Season with salt and ground black pepper. Now add the bulgur and freekeh to the pan and mix well. Pour in the hot water, stir and bring it to the boil. Cover, reduce the heat and simmer on low to medium heat for about 20 minutes or until all the water has been absorbed. Turn off the heat, cover the pan with a clean kitchen towel and place the lid on firmly. Rest the pilaf for 5-10 minutes before serving. I hope you enjoy this delicious, ancient food, packed with goodness; Afiyet Olsun, Scrumptious pogacas, savory pastry with cheese, olives and various fillings, displayed at a bakery in Istanbul These delicious cheesy pogacas (poh-ah-cha) are a favorite breakfast or tea time treat in Turkey and we love them. They are easy to make at home; make your kitchen smell heavenly and they are very popular with children, as well as adults. Bakeries, street stalls sell freshly baked pogacas (plain, with white cheese, olives or with potato & cheese filling) in Turkey and with a glass of cay aside, they make a delicious and affordable breakfast or tea time treat. My homemade peynirli pogaca, savory pastry with cheese and parsley; easy to make and delicious

My children adore pogaca and we made our peynirli pogaca, savory pastry with feta cheese together; they loved getting involved. My pogacas are rather chunky, like the ones you would get in bakeries in Turkey and one is enough per person. You can make smaller ones if you like. They are absolutely delicious straight from the oven, but they also keep well for a few days. The next day (if any left!), you can microwave them for 10 seconds or gently heat under the grill, so delicious. Hope you enjoy them as much as we did! Here’s also my YouTube video on how to make pogaca:

Peynirli pogaca; Turkish savory treat with white cheese and parsley; great for breakfast or as a snack.I love the savoury pastries in Turkish cuisine and living abroad, greatly miss them; so pogacas, boreks, pide, gozleme frequently turns up at our table. You can find all these savoury Turkish pastries and many more at my cookery book, Ozlem’s Turkish Table, Recipes from My Homeland,  Signed copies now 25 % off at this link, delivered worldwide, including the US. Combine the warm milk and dry yeast in a small bowl and mix well. Let it stand for 5 minutes so that it gets foamy.

In a large bowl, stir in the flour and salt and make a well in the middle. Add the yoghurt, mild olive oil (or sunflower oil) and the beaten egg to the flour mixture, in the middle. Stir in the foamy yeast mixture and knead well with your hands for a few minutes, until the dough comes together. Shape the dough like a ball, place in the large bowl and cover with a cling film. Let it rise in a warm place for 45-60 minutes or until doubled in size. While the dough is rising, prepare your filling. In a medium size bowl, stir in the crumbled Turkish white cheese or Greek feta cheese and chopped parsley and mix well.

Once the dough has risen, punch down and divide into 11 equal pieces, each about a size of a small tangerine. Roll each piece into a ball, and then flatten into a round flat circle with your fingertips, about 10 cm, 4” in diameter (you can make them smaller if you prefer). Place a spoonful of the filling mixture (take care not to overfill) at one side of the circle dough, leaving a little unfilled dough margin near the edges. Fold the circle to cover the filling to form a half moon shape. Make sure the dough covers the filling and meet the other end. Seal the two ends of the dough, pressing with your fingertips well. Place the stuffed dough on the greased tray and repeat this procedure with the rest of the dough pieces. Place the prepared pogacas, stuffed dough pieces side by side on a greased tray. Brush them with the beaten egg and sprinkle with nigella and sesame seeds. Bake in the preheated oven on the middle rack for about 25 – 30 minutes, until they are golden brown at top. My homemade peynirli pogaca, savory pastry with cheese and parsley; easy to make and delicious

Continue Reading
By Ozlem Warren on October 22, 2013 in Casseroles and Stews, Gluten-free recipes 18 Kiymali Ispanak, Spinach with ground meat, onions and rice is one of my favorite comfort food that I turn to often. Spinach is a much loved vegetable in Turkey and often finds its way in boreks, savory pastries and also enjoyed with eggs. This dish, like other all-in-one pan dishes called “Tencere Yemekleri” in Turkish, is a popular one at home. Spinach, rice and ground meat are cooked together in the pan, with a generous tomato based sauce to dip your bread in. It is very easy to cook, delicious and you have a complete, healthy dish in a short time. This meal is also gluten-free if you use wholegrain basmati rice. “Tencere Yemekleri” is also popular by the locals, enjoyed at  the traditional, local restaurants called “Esnaf Lokantasi”. Trays of mouthwatering precooked and gently heated bean stews, rice, vegetables cooked in olive oil, stuffed vegetables, spinach with onion and eggs and many more are displayed in a buffet style. This is slowly cooked “fast food”, Turkish style; all you need to do is to pick up your tray and point to the Chef, Asci, which dishes you would like to try. They are ever so inviting, healthy, delicious, great value and a wonderful way to sample some home style Turkish meals. We enjoyed this feast in Asik Restaurant in Didyma during our Culinary & Cultural Turkey tour this year; really a feast to all senses. I hope you enjoy this favorite comfort food featuring spinach. I like to use all the stems and leaves of the spinach, once washed well. Plain or garlic yoghurt with crusty bread aside go really well with this spinach meal. We also enjoy this potato and bulgur patties, bulgurlu & patatesli kofte, to go with this spinach dish; they are delicious to dip into wonderful sauce of the spinach meal.

Heat the olive oil in a heavy, deep pan. Stir in the onions and cook until golden. Add the ground beef and garlic, stir and cook for a few minutes, until the juice from the meat is evaporated. Add the rinsed rice, tomato paste and the hot water, stir well. Once the mixture starts to bubble, add the chopped spinach and season with salt and ground black pepper. Cover the pan and cook over medium heat for about 25 minutes.

You can serve this delicious spinach meal with a dollop of plain yoghurt over the top, sprinkled with red pepper flakes. Fresh, crusty bread aside is ideal to mop up the delicious juices.