One of the things I love about Istanbul, is the exposure of thousands of years of history. Indeed, Istanbul is a city where east meets west; at one side the ultra modern buildings, the other side, the centuries old Old Istanbul with Hagia Sophia, the Basilica Cistern and many more. The east and west surprisingly blend in well, and you feel you are walking around an open air museum,  so breathtaking.

Sultanahmet in Old Istanbul has such amazing sites like the Topkapi Palace, the Blue Mosque, The Basilica Cistern and many more, all these wonderful pieces of history are within walking distance to one another. The area is also very child friendly; wonderful to see lots of children visiting the museums, feeding their curious minds. I took my 9 year old son to Sultanahmet in Old Istanbul; we took the underground (subway or Metro, as locals call it) from the European side of the city, Levent, all the way to Taksim and then to Karakoy, so efficient. Then we took the Tram from Karakoy to Sultanahmet; worked so well, and no hassle of traffic (and must say, even the journey itself was exciting for my son!). 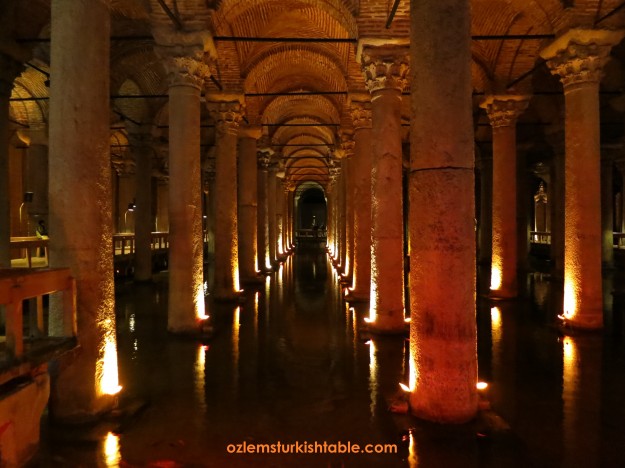 My son is fascinated with the 6th century cathedral size Basilica Cistern, especially with the Medusa column. The Cistern is the largest of several hundred ancient cisterns that lie beneath Istanbul. I love the tranquility in there; you feel like you paused the time for a while, so peaceful. The Medusa pillar was a highlight for my son, as he studied the Roman period  this year and read about the Medusa. He was eagerly telling me all about the snake hair and many legends behind it! Soon, we were hungry (there’s always time for food at home!).  Street food, stalls selling Simit, sesame-encrusted bread rings, roasted chestnuts and corn are every where in Istanbul. They are great value and just hits the spot when you are out and about. We had our fair share of roasted chestnuts right outside of the Basilica Cistern, delicious. Hafiz Mustafa in Sultanahmet carries a wide variety of Turkish delights, and has a wonderful cafe.

Well, we couldn’t just had the chestnuts, as my son spotted his favorite sweet, Lokum – Turkish Delights!  Hafiz Mustafa has been producing Turkish Delights since 1864 and this shop is a wonderful experience. The friendly staff showered my son with complementary Turkish delights, and the Literary Cafe inside the shop looked very inviting. Home made Turkish delights are surprisingly easier than you think and delicious, here is my recipe for Turkish delights, if you like to have a go. Baklava, dried figs stuffed with walnuts – all so very inviting.

As expected, we had our fair share of the baklava. The dried figs here have been cut in half and stuffed with walnuts; they are then poached in syrup and cooked until soft, so very delicious. Figs and walnuts are also power food, very nutritious, and packed with antioksidants. My parents and my dear sister Oznur live in Istanbul and they are my eyes and ears. They kindly fill me in what’s the latest in the city, especially at the food front. As our roots go back to Antakya, ancient Antioch, they keep a close eye on especially the Southern Turkish food available in Istanbul. When my dad said that we have to try the newly opened Hatay Medeniyetler Sofrasi Restaurant in Taksim, the plan was made and my sister and my cousin Duygu made it there the next day. 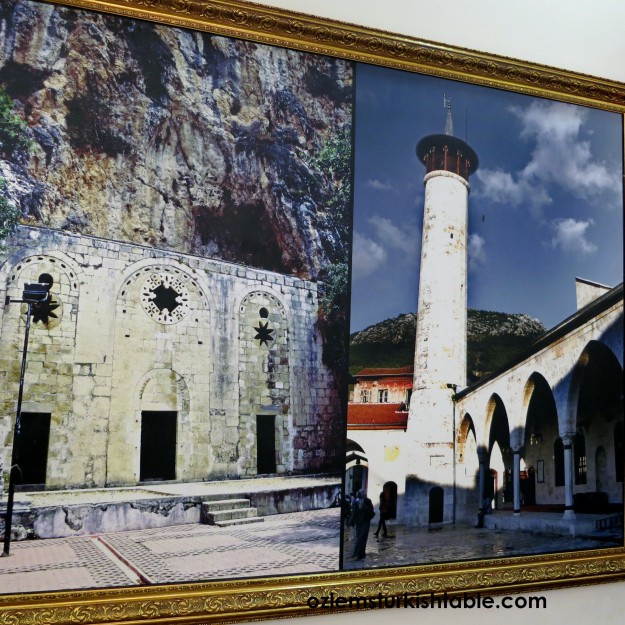 Antakya has been a city of tolerance; Christians, Muslims and jews live happily and in peace there. This picture show the St Peter’s Chuch and the Habib-i Neccar Mosque in Antakya.

Antakya, ancient city of Antioch has been occupied by humans since the Calcolithic era (6th millennium BC), and hosted many civilizations ; the restaurant makes its name as of the Table of these Ancient Civilizations. Antakya has historical significance for Christianity as it was the place where the followers of Jesus Christ were called Christians for the first time. Antakya since then has been a city of tolerance; Christians, Muslims and Jews live happily and in peace together in Antakya. This picture at the restaurant show the St Peter’s Chuch and the Habib-i Neccar Mosque in Antakya. Ismail Bey from Hatay Medeniyetler Sofrasi; so passionate about the history and cuisine of Antakya.

We greatly admired the passion of Ismail Bey from Hatay Medeniyetler Sofrasi for Antakya’s history and cuisine. The whole restaurant is full of pictures from Antakya; the Mozaic Museum, St Peter’s Church, the famous Long Market – Uzun Carsi and many more. Ibrahim Bey says they source 90 % of their ingredients from Antakya and proud to serve regional Antakya dishes in the restaurant. Another great thing about Istanbul; you can now taste a variety of regional cuisines, the city is such a melting pot. One of the mezzes that we enjoyed is Patlicanli Eksileme – Smoked Eggplant Salad with tomatoes, onions, parsley with olive oil, dried mint & lemon dressing. The sweet, smoky flavor of the eggplants here work so well with the vegetables and the dressing, here is the recipe if you’d like to try out. 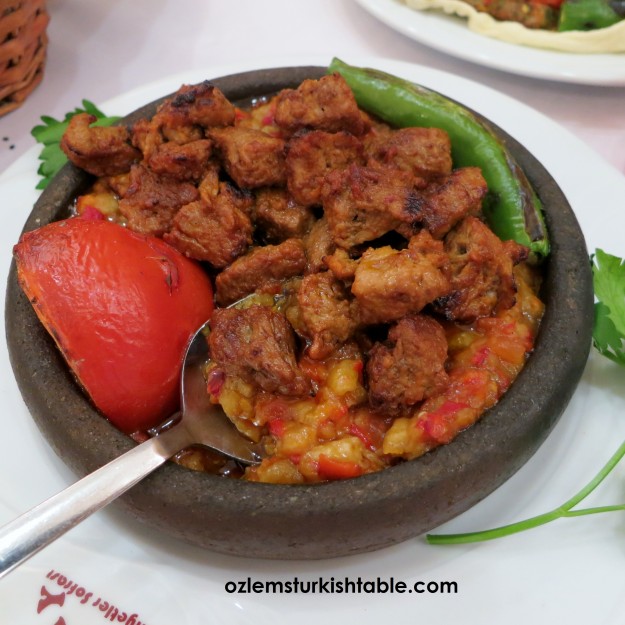 Abagannuc; sauteed chunks of lamb over the bed of eggplant, tomato and pepper sauce

Then came Abagannuc;  sauteed chunks of lamb served over Abagannuc; the smoked eggplant, tomato and pepper sauce, just melted in the mouth. Feast continued; this is Antakya’s Kagit Kebabi; Kebab baked in the oven in a special baking paper. I have vivid childhood memories of taking the ground meat mixture to my grandmother’s local bakery in Antakya, to cook this kebab for us (bakerys in Antakya also bakes many kebabs, casseroles and pastries for their customers). Ground meat, garlic, parsley, onion and spices in the mixture, another local specialty. Candied walnuts, figs and pumkin – and of course Kunefe!

Now time for the sweets; this time came the wonderful candied walnuts, pumpkin and figs, along with Antakya’s famous kunefe.

The candied walnuts are a real speciality of Antakya, along with others; locals start making this dessert at the early months of summer, and its preparation can take up to a month.  Young walnuts are soaked in water for a long period so that their bitterness goes away. Once they are cooked, the walnuts again soaked in syrup for a long time, a real labor of love. Ismail Bey kindly treated us to Antakya’s famous Kombe cookies, another regional specialty. It has a wonderful, crumbly texture and delicious flavors of tahini, sesame seeds, cinnamon, wild oregano and more. They were so good that I had to save one to take to my parents! Have you ever tried Menegic coffee? It was my first time trying this aromatic, delicious coffee, another Southern Turkish Speciality. Menengic, or cetene or citlenbik, as locals call it, is Pistacia terebinthus, known commonly as terebinth and turpentine tree, is a species of Pistacia, and wildly grown in Southern Turkey, part of the national flora. Cooked with milk, you can certainly get the wonderful pistachio taste, a unique experience. A delightful feast, Antakya style, with my sister and cousin in Taksim, Istanbul

We enjoyed a truly delightful feast, treasures of Antakya, with my sister and cousin in Taksim, Istanbul – so worth a visit.

I hope you enjoyed our adventure in the fascinating city of Istanbul and a taste of  Antakya available in Istanbul. As you can see, many of the mezzes and dishes here are so easy to make, healthy and delicious, I hope they inspire you to have a go.

There is more to share again soon! Until next time,